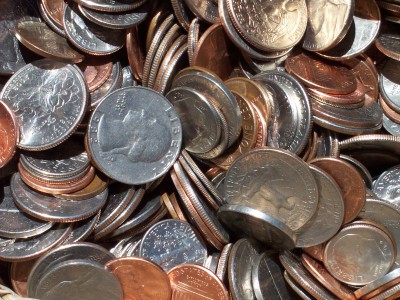 Guest Post – A Nickel Sent Was A Nickel Wasted (Almost)

I received a solicitation in the mail today from a well-known national nonprofit organization and there it was, peeping through the small, round window on the front of the envelope — a shiny, brand new 2015 “Return to Monticello” nickel, minted in Denver, bearing an image of President Thomas Jefferson (based on the Rembrandt Peal painting of 1800) on the obverse and the 1938 restored design of Jefferson’s Virginia home of Monticello on the reverse.

I trust/hope that the soliciting nonprofit organization has done its homework and can prove that the nickel gambit is effective in securing new donors and increasing donations from existing donors. While I readily admit that I enjoy getting money in the mail and that I am attracted to small, shiny objects, this piece sure didn’t work for me (or should I say “on” me).

First, the coin gimmick is tired. I’ve been getting coins in nonprofit direct mail packages for years. I still remember the first one I received well over 20 (or was it 30?) years ago – a letter with a brand new quarter, asking me to make some kid’s day by passing it forward. While I actually made 27¢ from six such mailings last year (one dime, three nickel and two penny mailings), nonprofits should give the coin thing a rest and get more creative.

Second, by sending me money (albeit only five cents), I am convinced that the nonprofit is trying to guilt me into giving them money in return. The guilt trip thing may work for my 93-year-old mother’s age cohort, but it sure doesn’t resonate with this member of the Baby Boom generation. Give me information on outcomes and impacts of my donations and your work (something the direct mail letter never touched on) rather than tossing me a nickel.

Third, including an actual nickel added cost to the mailing campaign (undoubtedly many, many thousands of pieces), thereby reducing the net available for programs and services. The coin scheme hardly seems efficient and I don’t like inefficiency when it comes to nonprofit spending.

Finally, the letter that the nickel was pasted to never explained why the nonprofit was sending me the nickel in the first place. “Dear Friend,” the letter said, “I’ve included a nickel to make a point.” It continued, “Both you and I know that a single nickel won’t go far in the fight against [specific disease]. But even nickels can quickly add up. And if you invest those nickels…you could cave not only one child but thousands of patients!” Wait a minute; why are you sending me the nickel and not investing that very same nickel in your research/treatment/care?

Maybe I’ve seen too many direct mail solicitations in my lifetime, maybe I’m just too cynical when it comes to direct mail, maybe I’m totally missing the point, but I have to believe that there are better ways these days for raising money through the mail. A penny for your thoughts?

(By the way, I gave the shiny, new nickel to my five-year-old granddaughter and it made her day!)